Women's Spaces: "Reflections on the Presidential Inauguration, the Causes of the Insurrection, and Solutions in Electoral Campaigns and Federal Social Programs" 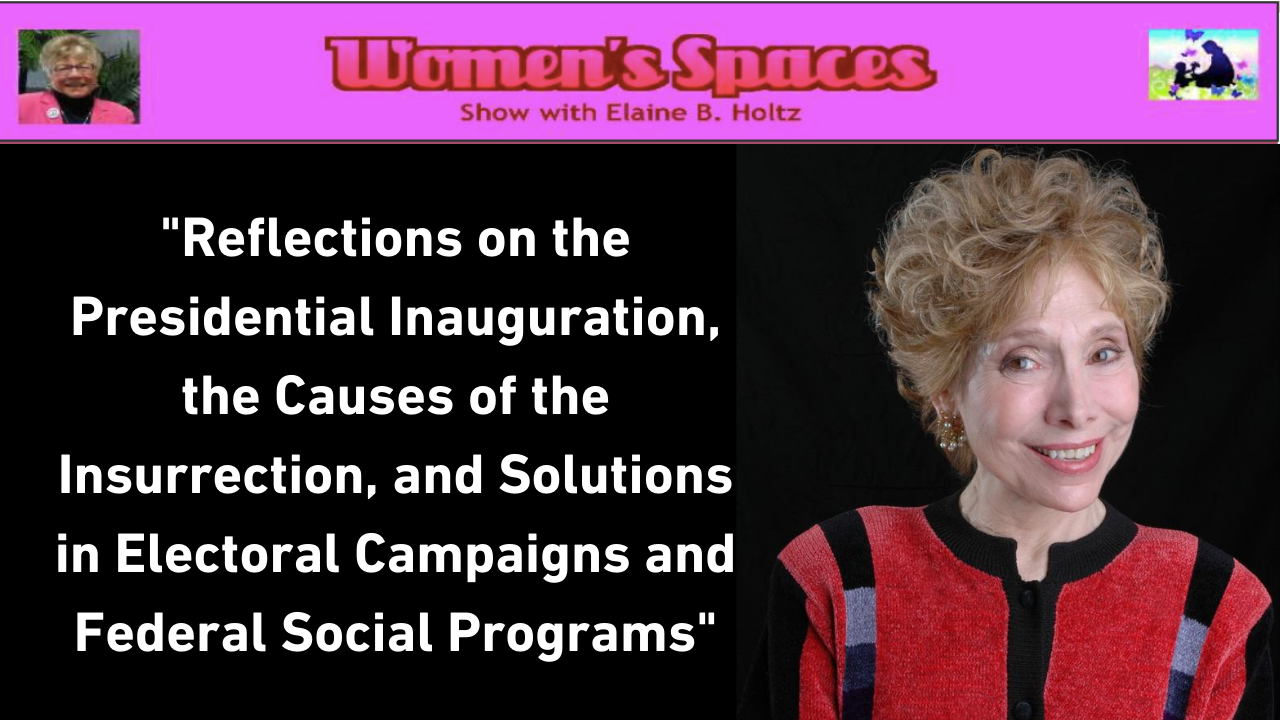 Dr. Fraad joins Elaine B. Holz on Women's Spaces to talk about how the Inauguration of President Joe Biden and Vice-President Kamala Harris affected her and what she believes were the causes of the insurrection on January 6, 2021.

As men lost their jobs to corporate location of factories overseas, and many their wives through divorce for not being able to provide for the family, they became enraged and blamed the changing gender and racial landscape in which they no longer felt privileged. The felt dethroned beginning with the passage of the 19th Amendment that the Women's Suffrage Movement lobbied for so long under adverse and violent opposition. The women who joined these angry men on January 6th preferred male domination allowing them to shirk the responsibility of a partnered life. The anger was justified but not the expression of it, which threatened the lives of duly elected representatives by the People of the United States. Consequences for these actions need to be felt, especially by those Senators and Representatives who were accomplices in the attempted violent overthrow of the government, including the wife of Supreme Court Justice Clarence Thomas, who sponsored 80 busloads of protestors of the election turned rioters, and the social media sites like Qanon spreading rumors and lies to rile the mob. Dr. Fraad believes the 14th Amendment Article III on sedition needs to be invoked, as Lt. General Charles Flynn, the brother of Ret. Lt. General Michael Flynn, the pardoned former Security Advisor who pleaded guilty to perjury, delayed calling up the National Guard to protect the Capitol and the Congress meeting to approve the Electoral College vote for Biden and Harris. Dr. Fraad says that we have now the worst Economic Depression since 1929 left behind by Trump. The USA fought fascism in WWII, not socialism. The FBI must change its focus investigating Black activists and look at white supremacist terrorists. Even Obama turned federal power to crush the Occupy movement and let abusive banks off the hook. Winter evictions should be halted at least in the winter months like it is done in France. Social programs, which is what socialism is, need to be enacted like the WPA under President F. D. Roosevelt, to rebuild our decaying infrastructure and create Climate friendly American jobs in the clean energy generation sector of the economy. Dr. Fraad give good ideas on public support of elections which are limited to 2 months and not pay-to-play on the media with long drawn-out campaign cycles. Dr. Fraad concludes: "Get active and don't be afraid if they label it socialism."