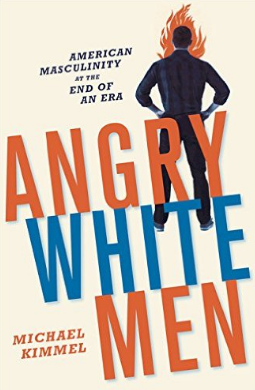 It's been a tough 40 years for working and middle-class white men in America.

Accustomed to an exalted place in the social hierarchy, they have seen their wages stagnate and decline since the early 1970s. At the same time, women have gained unprecedented new freedoms and our society became more racially and culturally diverse.

Rather than adapt and change, many of these men cling to male dominance. Michael Kimmel, a professor of sociology and gender studies at Stony Brook University in New York, journeys deep into the worlds of his white male aggrieved subjects.

Kimmel has produced a masterful account of white men's rage. He focuses on the sons of successful skilled craftsmen, small businessmen and small farmers disenfranchised by the corporatizing of America, mass production, outsourced work, mega-stores like Walmart and Home Depot and restaurant chains like McDonalds and Applebees.

The fathers and grandfathers of these raging men were the people who started and prospered in family businesses. They were the men who owned local grocery stores, hardware stores, mom-and-pop restaurants, and small farms. They worked hard and proudly supported their families in comfort. They expected to pass their hard-earned accomplishments onto their sons in the patriarchy that was America. That did not happen.

Kimmel also describes the rage of male blue-collar workers. Their work was outsourced, leaving them without family wages or the marital security those wages allowed. Their rage is fed by hate radio and TV, which transforms men’s sad confusion into hatred for feminists, gays and immigrants, à la Rush Limbaugh.

Kimmel introduces the reader to groups that flourish as these men founder.

Men’s Rights Associations lay claim to men’s right to stay married with regular access to their children. They rail against women’s rights to divorce, to paid employment and to child support when separated or divorced with children. These angry men do not seem to want equal roles in caring for their children, but rather the right to access women and children with male authority over them. They are differentiated from Father’s Rights groups, which struggle for legal acknowledgment of the active roles they play and want to continue to play in their children’s lives after separation or divorce.

Kimmel also explores what he calls, “The White Wing,” racist male supremacy groups like the KKK, the White Skinheads, White Aryan Resistance (WAR), and the Neo-Nazis that wish to avenge white mens’ humiliation and loss through violent combat against immigrants, minorities, Jews and feminists. They want to restore white male domination. They turn their rage against the corporate sector, which has outsourced their jobs and taken their livelihoods. They lay the blame on Jews who they see as corporate masterminds.

Although Kimmel does not discuss them, I would mention that there exist four other main bastions of male hegemony: the NRA, the U.S. military, Evangelical churches and heterosexual pornography.

The Role of Capitalism

The mass of Americans are mere numbers in the ledgers of big business. The decisions to outsource millions of jobs and to automate millions more are decisions made with profit as the sole consideration. Yet, Kimmel does not stress the role of corporate capital or capitalism itself in the problems he describes.

Wages stagnated in the 1970s when companies in many industries found they could profitably move production overseas and more newly empowered women and minorities began taking jobs in many fields that previously had been reserved for white males. In a job market where institutional racism and sexism had caused labor shortages, white males received one bonus for being white and another for being male. Since labor is now abundant, those bonuses are no longer necessary.

Profits continue to accumulate at the top. In 2013, the 400 richest Americans took in $300 billion and their total assets surpassed $2 trillion, more than the bottom 60 percent of the population. Corporate interests have tightened their grip over the media and many politicians. The system, in turn, diverts the anger of enraged white men who do not see that the problem is capitalism itself.

Organizing for economic and political democracy and the redistribution of wealth and power — and not simply a second New Deal as Kimmel urges — is necessary to address the economic sources of male rage.

There is a second part of a solution that Kimmel does not mention. That is democracy in personal relationships. The men he describes are unaware of what they missed. Their “manhood” left them out of touch with their emotions. They were robbed of tenderness, vulnerability and the right to perform daily care for their homes and children.

That caring and emotional labor teaches people invaluable lessons about the importance of sustaining life. Part of the anger of “entitled men” comes from their own limited definition of manhood. The only intimate emotional friendships many could have are with wives who do the emotional labor to with connect them. It is women who overwhelmingly do the social connecting that permitted these men to appear self-sufficient while their wives were caring for their children and maintaining connections with family, friends and community. Without husbands, women still maintain emotionally intimate relationships with women friends, children and families. Men’s “self-sufficiency” does not permit that.

What Kimmel’s good book points toward is that we need a strong, appealing, sensible Left that addresses the dispossession of America’s angry men and replaces it with a movement that respects their emotional, political and economic needs. It’s really up to us.

This article was originally published on February 25th, 2014 on The Indypendent.