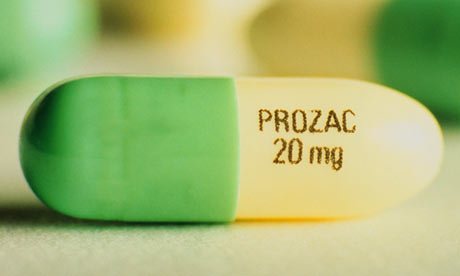 This article was originally published on The Guardian.

There's a reason psychiatrists prescribe drugs rather than talking therapy: the latter makes no money for pharmaceutical firms.

he New York Times recently led with a front-page splash about psychiatry's propensity to prescribe pills, "Talk Doesn't Pay, So Psychiatry Turns Instead to Drug Therapy". That news is already widely known in the mental health field, but it has vast ramifications for Americans trying to maintain their sanity in our market-driven and medical system for delivering mental healthcare.

What does the turn to drug therapy mean for the mass of Americans?

Mental illness has not decreased with the change from talk therapy to drugs. In fact, as Robert Whitaker's book diagnoses, mental illness in America has become an established epidemic. So-called miracle drugs like Prozac are taken by 11% of the population – and Prozac is only one of the 30 available antidepressants on the market. Antidepressants are accompanied by anti-anxiety and anti-psychotic drugs. Xanax, America's leading anti-anxiety medication, is so ubiquitous that Xanax generates more revenue than Tide detergent, reports Charles Barber in his Comfortably Numb.

Do these psycho pharmaceuticals work to restore mental health? Actually, the evidence is overwhelming that they fail. Antidepressants, the most popular psycho-pharmaceuticals, work no better than placebos. They work 25% of the time and stop working when the user stops taking them. In addition, they may actually harm patients in the long run. They disrupt brain neurotransmitters and may usurp the brain's organic soothing functions.

Psycho-pharmaceuticals are less effective in the long run than talk therapy. Talk therapy, like drugs, does change brain and body chemistry; unlike drugs, though, talk therapy has no side-effects. Instead, talk therapy gives a patient tools that usually help to solve future problems. The latest research is most clearly expressed in both Irving Kirsch's Antidepressants: The Emperors New Drugs and Gary Greenberg's, Manufacturing Depression, both published last year. Kirsch is one of the world's leading psychiatrists; Greenberg is one of the world's most prestigious psychologists. Their views are echoed by many voices in the field of mental health. Why is prestigious and extensive research so widely ignored by doctors and patients alike? Our market-driven healthcare system gives us clues.

All 30 of the available antidepressants have suffered lawsuits within five years of their appearance on the market. These suits are often settled with large payments and gag clauses. The new generation of anti-psychotics are the latest case in point. Anti-psychotics were the single biggest targets of the False Claims Act. Every major company selling anti-psychotics – Bristol Meyers Squibb, Eli Lilly, Pfizer, Johnson and Johnson and AstraZeneca – has either settled investigations for healthcare fraud or is currently being investigated for it. Two recent settlements involving charges of illegal marketing set records for the largest criminal fines ever imposed on corporations. Their corporate logic is expressed in the words of Dr Jerome Avorn, a medical professor and researcher at Harvard: "When you are selling a billion a year or more of a drug, it's very tempting for a company to just ignore the traffic ticket and keep speeding."

There is also the widespread practice of paying physicians and psychiatrists heavy subsidies to recommend psycho-pharmaceuticals to their colleagues in small meetings at which a drug company representative is present. If doubt or criticism of the discussed drug is expressed, the doctor's stipend stops. Another legally acceptable tool is to publish praise of a company's drug in a scholarly article, which is often written by drug company personnel and simply tweaked by the physician whose name appears on the article. The physician is paid handsomely for such a service.

Under the pressure of legal settlements and embarrassing disclosures, eight pharmaceutical companies began posting doctors' names and compensation on the web. ProPublica compiled these disclosures, totaling $320m, into a single database that allows patients to search for their doctor. Receiving payments for publishing articles written by drug companies is not illegal.

Two doctors, Dr Joseph Biederman and Dr Timothy Wilens of Harvard University Medical School, illustrate the close and cozy relationship between medical "scholarship" and drug companies. Drs Biederman and Wilens netted $1.6m eachfrom drug companies for their work in recommending powerful anti-psychotic drugs for children. Biederman, Wilens and other extremely well-rewarded child psychiatrists are in part responsible for giving children the diagnosis of paediatric bipolar disorder for which anti-psychotic drugs like Risperidal and Zyprexa are used.

Experts agree that there is no long-term improvement in children's lives from taking anti-psychotic drugs. In fact, these drugs have a substantiated pattern of metabolic problems and rapid weight gain that often leads to diabetes. The use of bipolar diagnoses and bipolar medications is one small example of how market-driven mental healthcare works in the United States. It illustrates the transformation of US healthcare into a system dominated by some of the richest corporations in the world.

Caring about profit is first, and that is why psychiatry has turned to drug therapy.